Our future Clan Wardlaw Center Scotland Heritage Library will be in Scotland. Our gracious benefactor, Andrew Pearson, has put in his will to donate his extensive, very valuable, library to us. This will be an invaluable source for future research and our ongoing work on the Wardlaw history. Thank you, Andrew Pearson! 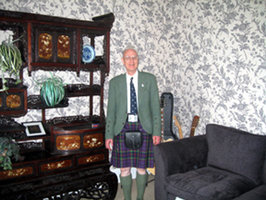 This is part of our extensive Heritage Center Library in America. We have a new beginning Clan Wardlaw Center now and invite all our members, and any other interested Wardlaws, to come and visit us here. Everything in this room will be moved to a larger place if and when we have a better place someday. For a list of the complete library I can send it to you in an email. dianewardlaw7@yahoo.com

CWA Collection of Scotland Books. This partial list are the newer items.

An Old Story of a Highland Parish, by George P. Shaw, 1926 (Mortlach)
Celtic Mythology & Religion, by Alexander MacBain, 1917
Dunbar’s 1000 Years, by William Dunbar of Kilconzie
Gairloch and Guide to Loch Maree, by J.H. Dixon F.S.A. Scot., 1886
Greenock’s Foundations, Inverclyde Renfrewshire
Heraldry in relation to Scottish history and art, by James Balfour Paul, 2009
History of the Clan Ross, by Alexander M. Ross, 1983
Mining Mathematics Simplified, by James Wardlaw, Sr., Scottdale, PA, 1919
Ochiltree-Its History and Reminiscences, by Alexander Murdoch
Systematic Theology, Vols. I, II, & III, by Ralph Wardlaw, D.D., 1856
The European Nobilities in the Seventeenth and Eighteenth Centuries, Vol. I, ed. by H.M. Scott, 1995
The Legacy of Rome-Scotland’s Roman Remains, by Lawrence Keppie, 1986
The Place-Names of Fife, Vol. 4, by Simon Taylor, 2010 (The Center now has all 4 volumes)
The Slogans and Warcries of Scotland of Old, by Andrew Pearson, 2011
The Scottish Nation, Vols. I, II, & III, by William Anderson, 1863
The Story of Kirkintilloch, by Don Martin 1980 (Comyn)